Why this date and not his birthday?

Well, that was the day I nearly died.

I had developed double pneumonia, without realising it, after injuring my left foot and being, basically, bed ridden.  I had put the back pain down to muscular exertion due to the crutches I was using.  But the back pain got worse and one morning, I collapsed in the lounge, barely able to move.  My phone was in the main bedroom and I had to crawl up the passage to get to it.  That crawl was the hardest thing I have ever had to do.  My beloved Mom had sensed something was wrong and had, repeatedly, tried to phone me.  I managed to message her back to get help and she, immediately, phoned G-Dad who contacted an ambulance on his race home.

I lay on the bed, barely breathing, unable to move (this is because the blood in the extremities travels to the brain, to protect it).  I knew I was dying.  I called out to God to help me.  And then something incredible happened.

Something 'crashed' through the roof into my room.  Something massive and angelic-like.  I say 'crashed' because the force at which it appeared felt like an elevator free falling and crashing on the ground floor.  This being sat next to me, took my hand and vanished.  Fast forward 1 hour and 20 minutes and lying in the emergency room on oxygen, the Physician couldn't believe I was still alive after looking at the CT scan of my lungs.  He told G-Dad he was giving me a 50/50 chance of making it through the night - it depended on him choosing the correct antibiotic to help me and how I responded to it.  I spent three days in ICU and 4 days in a general ward.

On the third day I was in hospital, my Mom's beloved cat was rushed to the vet, very ill.  His condition?  He had water on his lungs!  Just like that - out of the blue. On the morning I was discharged from hospital, he passed away. Coincidence?

About a week later, I fell into a deep sleep and had a very vivid dream.  I was lying in a hospital room, G-Dad was sitting on my left and my Mom, on my right.  A nurse came into the room, holding a baby and told me it was time for her first breast feeding.  I woke up with this overwhelming longing to have a baby.  It was this indescribable thirst and nothing was quenching it.

I have suffered from a condition called PCOS since I hit puberty and was told the year prior to my near deathish experience, after a full examination and tests, that I could never have kids.  So this dream did nothing to help calm this statement which was etched into the back of my mind.

A few weeks after my release from hospital, G-Dad was looking at me and suggested I get a pregnancy test.  I laughed at him, telling him it would be a waste.  But he was adamant.  He said he just had this very strong feeling that I was pregnant.  So, I indulged him.  I looked at the double lines on that long, white piece of plastic, amazed.  I told him it had to be a mistake and that he needed to go out and buy three other tests by different manufacturers.  They all came back positive.

And so, a miracle was born 9 months later.

G-Dad and I agreed that I would get dibs to his first name.  I had always loved the name Gabriel and after my I-was-almost-dead experience and encounter with, what I truly believe was an angelic being that saved my life, I decided what greater way to thank the universe for my miracle than to name him after an angel.

A miracle who teaches so many of us so much about ourselves and about life every single day.

But most of all, a miracle who teaches us what love truly is.

He is our miracle, Gabriel. 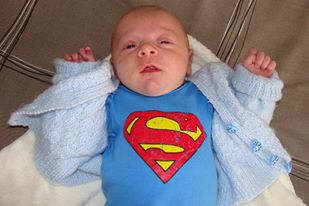 Posted by Gabriel's Angels at 11:04 No comments: