Starting The New Year With A Bang

Life has been a little hectic and eventful lately, hence my lack of blogging.

So I thought I would finally discipline myself enough to update you all on how Gabriel is doing.

Firstly, Gabriel received a new friend earlier last year -an amazing and adorable yellow labrador, called Zeke, from the SA Guide Dogs Association.  I will write more about him in my next blog posting.

Gabriel is doing remarkably well, developmentally.  He has had a very keen interest in aircrafts for a while now, and loves learning the names of all the various military planes and civilian planes (thanks Youtube!).  We use this to our advantage - we are using his interest to teach him language and communication, via typing on a device or keyboard.  He loves this and beams with pride once he has completed a word.  He also repeats the various names, verbally, as best he can and does remarkably well!

With growth and knowledge comes another, harder, less spoken about side of classic autism.  Intense frustration and Gabriel's injurious behaviour has increased too.  And he always takes it out on his own head.  Gabriel will alternate between hitting his head hard with his palms or smashing the back of his head against a wall.  We have to restrain him, by pulling him away from the wall (who knew a 7 year old could be so unbelievably strong!) or letting him ride out his meltdown on our bed; a big, safe space.

Two weeks ago, we received a frantic phone call at work.  All that could be made out was, "Gabriel ran into the wall with his head".  He was screaming in the background and we rushed home immediately.  When I got out the car, and I approached the front door, I was greeted with this sight : 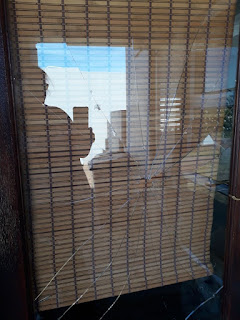 That is our front door.  Gabriel had had a meltdown, ran towards it and, in the blink of an eye, smashed the back of his head so hard through the blinds, that the glass shattered.  We ran inside to find our son, calmly playing on his ipad.  Upon inspecting him, he only had a tiny, superficial cut on his head and some scratches on his neck - of which the skin was unbroken!  His guardian angels were definately working hard by his side!  The one advantage is that Gabriel got such a fright, he hasn't attempted this anywhere where there is glass, again!

We have invested in a padded helmet, to try and protect his head during a meltdown - this is only worn when he starts to bang his head: We are terrified he is going to develop epilepsy as a result of this, so we are trying everything to prevent this from happening.  Communication is key but this takes time and many 7 year olds battle to self-regulate their emotions when upset.

Sometimes we do feel like we are swimming upstream, battling some invisible force, trying not to be overcome with fear of what the future holds.  But no matter how we might feel, we always try to imagine how Gabriel feels - how hard this world can be for him and how immensely frustrating it must be to battle to speak, to be understood, to have a body that doesn't do what you always want it to.

But most of all - we believe in Gabriel 100%, no matter what happens.  We love him unconditionally, deeply and madly!  And we will never, ever, give up on him.

Posted by Gabriel's Angels at 13:23 No comments: